What type of dog would you get? Back in the 1800s, you might have gotten a Bloodhound. 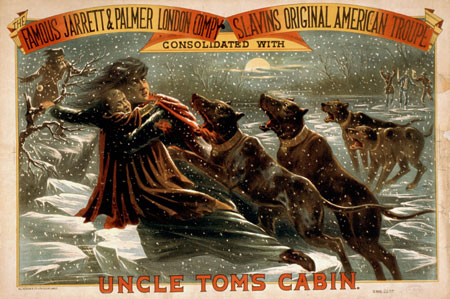 Bloodhounds chase Eliza across the ice in this poster for a stage production of Uncle Tom's Cabin, 1881.

In the 1800s, popular portrayal of Bloodhounds as bloodthirsty killers provoked public outcry, fear, and public conversations similar to the ones being held today about pit bulls. Bloodhounds were also at the top of the list when it came to fatal and serious attacks. Their reputation made them popular with substandard owners who just wanted a “tough” dog and had no idea how to manage them appropriately.

In the 1940s, a Doberman would have fit the bill. Today, you might get a pit bull or a Rottweiler.

Certain types of dogs have been given strong reputations by our society. This reputation is more of a stereotype than a reality, as evident by the slow change of certain breeds’ reputations over time. Pit bulls did not always intimidate Americans; witness Pete the Pup in the “Our Gang” television series. German Shepherds, once considered devil dogs, have been redeemed in part through association with Rin Tin Tin and widespread use in positive law enforcement roles. Breeds’ reputations are at the mercy of popular culture and societal perceptions.

A person who seeks out a dog for intimidation will turn to popular culture, societal stereotype, legal treatments, and other portrayals of dogs in order to determine what type of dog is the most intimidating to the most people.

Breed-specific legislation feeds this cycle by adding to the mythology of the “dangerous breed.” Breed-specific legislation’s goal is to protect the public from dangerous dogs; therefore, BSL leads to the inevitable conclusion that certain breeds of dogs are inherently dangerous. A dangerous dog is exactly what some people want. They go out, get a “vicious” pit bull, chain it in the backyard, fail to train or socialize it… and it delivers the desired intimidating behaviors—as would any neglected dog.

Janis Bradley describes this phenomenon succinctly in Dogs Bite But Balloons and Slippers Are More Dangerous (2005):

“…[Breed-specific] legislation itself enhances the mythologized image of these dogs [pit bulls] as super aggressive, thus increasing their attraction for people who like this idea, and who are precisely those people most likely to treat them inappropriately and encourage aggression.”

“Demonizing certain breeds only furthers their appeal to the most extremely abusive of owners while feeding into a public hysteria and frightening off any potential suitable owners for this breed of dog…. History has repeatedly shown that publicly portraying a breed of dog as exceedingly ferocious or dangerous will only serve to increase the breed’s popularity with dangerous owners.”

Despite the fact that the entire state of Ohio classified pit bulls as “vicious” for almost twenty years, Craig Turk, writing for the Ohio County Dog Wardens Association, admitted that “Pit Bulls are an ever-increasing problem in our state.” (“Breed specific legislation in Ohio.” NACA News, Vol. 29, No. 4, July/August 2006.) He cited chronic problems with criminal and abusive owners. Clearly, breed-specific legislation was not doing Ohio—or Ohio’s pit bulls—any favors. Maybe that’s why the state’s breed-specific dog control law was repealed in 2012 in favor of a breed-neutral law.

This same “vicious” stereotype that makes certain breeds attractive to thugs and lowlifes also makes them distasteful for “normal” dog owners. People who want to be perceived as friendly neighbors, good citizens, responsible parents, and respectable people tend to lean toward breeds that are considered “family friendly.” For these people, ownership of a breed seen by society as “dangerous” might cause them to lose status and respect among their peers.

Respectable, upstanding citizens are transformed into untouchables as soon as they bring that cute little pit bull puppy home. Some new pit bull owners are criticized harshly by friends; others find the whole neighborhood suddenly turned against them. A few have been disowned by family members. Politicians freely denigrate pit bull owners in the press.

Breed-specific legislation adds further layers of confusing and difficult requirements to certain breeds’ ownership. Breed-specific legislation not only discourages responsible people from owning certain breeds—even though these are the owners that these types of dogs need the most—but it also legalizes discrimination against, and places extra burdens on, the few responsible people who dare to provide a loving home for a dog of one of these breeds.

Is it any wonder that pit bulls and other so-called “dangerous” types of dogs have such a tough time finding loving homes with devoted owners?

It is not hard to imagine a world where, if Labrador Retrievers were portrayed at every turn as growling attack dogs, cities would have a “Lab problem” instead of a “pit bull problem.” But Labrador Retrievers are considered “family” dogs. They are not generally subjected to neglect, cruelty, and expectations of violent behavior. They are simply not desired by thugs because they are not seen as intimidating or dangerous.

Next Page: Silence About Mismanagement